This article is using {{Card template}}.
See Help:Style guide/Card for how to edit this kind of article.
Edit this article
Fist of Jaraxxus
2628 • AT_022
Regular 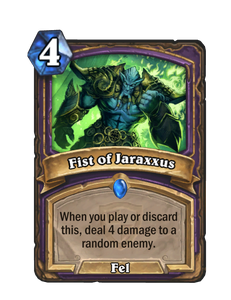 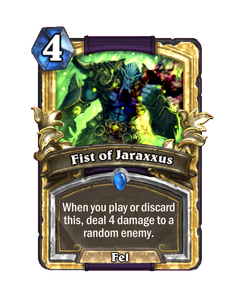 Dimensions: Full • 330 x 410px
When you play or discard this, deal 4 damage to a random enemy.
Flavor text 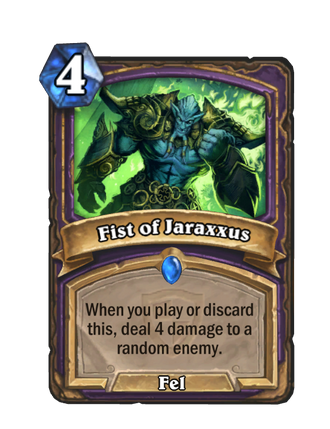 Fist of Jaraxxus is a rare warlock spell card, from the Grand Tournament set.

On its own, this card is a more expensive

Shadow Bolt that may also target the enemy hero, but the target is chosen at random. Its strength lies in synergy with discard effect of some warlock cards.

You can somewhat reliably discard Fist of Jaraxxus using semi-targeted discard effects, such as

Nightshade Matron. This works best in tandem with

Hand of Gul'dan to refuel your hand while discarding.

Wilfred Fizzlebang when the gnome attempts to summon a doomguard for the next challenge. Jaraxxus kills Fizzlebang for his efforts.