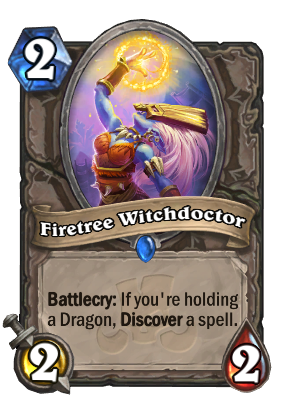 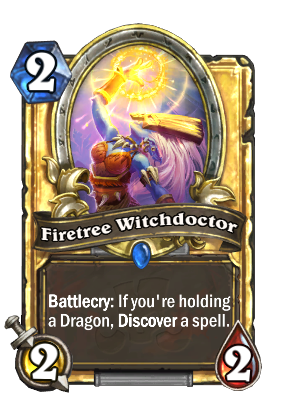 Battlecry: If you're holding a Dragon, Discover a spell.
Flavor text

If your tree is on fire - stop, drop, and troll.

Firetree Witchdoctor is a rare neutral minion card, from the Rastakhan's Rumble set.

Firetree Witchdoctor can be obtained through Rastakhan's Rumble card packs, or through crafting.

This card is considered a staple in Dragon-based decks, as it gives you more Card advantage and can help you generate extra value. The flexibility of Discover gives players a wider range of power, allowing them to maneuver more effectively around your opponent's plays.

Priest decks can use this as an extra chance to get Mind Blast, letting them Burst their opponent down when they aren't expecting it.

Shaman decks can replicate this Battlecry with Shudderwock, which fits well with Dragons which tend to have powerful Battlecries such as Crowd Roaster.

The Firetree tribe was one of the forest troll tribes that joined Rend Blackhand after the Second War as part of the Dark Horde.

Commanded by Rend Blackhand, the Dark Horde did not give up the battle to claim Azeroth, they were essentially still fighting the Second War, even though Rend's forces were significantly smaller than Thrall's Horde. They knew that they stood little chance of success, despite their alliance with the black dragonflight. A group of warlocks drove the Dark Horde, which had not relinquished the original Horde's involvement in demonic magic.

In general, trolls outside the Dark Horde have long since decided that the Firetree and Smolderthorn trolls are insane for allying themselves with the black dragonflight and continuing to fight an unwinnable war (if, indeed, it can be called a war).