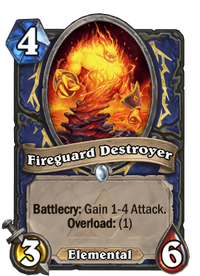 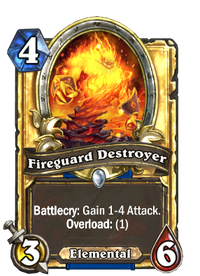 Ragnaros interviews hundreds of Fire Elementals for the position of "Destroyer" but very few have what it takes.

Fireguard Destroyer is a common shaman minion card, from the Blackrock Mountain set.

As a Wild format card, both regular and golden versions of Fireguard Destroyer can also be crafted for the following amounts:

Fireguard Destroyer is a variable card with a strong RNG component. At its minimum, it is a 4/6 for 4 mana + 1 Overload, which is barely efficient; but at its best, it is a 7/6 for 4 + 1, which is extremely efficient. Overall, Fireguard Destroyer is actually mana efficient (including the Overload) 75% of the time (anything but the minimum 1 Attack boost). However, the maximum 4 Attack boost makes it susceptible to Big Game Hunter. A good Turn 4 follow-up to Unbound Elemental. While Flamewreathed Faceless has the same cost but higher stats, it overloads one less Mana Crystal compared to it.

Synergizes poorly with Reincarnate and Ancestral Spirit since they wipe the Attack boost.

Attack
All will burn.