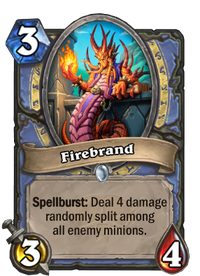 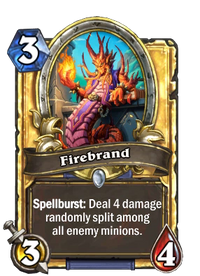 Too cool for school, too hot for thought.

Firebrand is a common mage minion card, from the Scholomance Academy set.

Firebrand can be obtained through Scholomance Academy card packs, through crafting, or as an Arena reward.

Firebrand has a decent body as a 3 mana 3/4. Firebrands spell-burst can work a bit like spell damage when you drop a spell it can boost the damage dealt by the spell. It can also help with getting the enemy's minions health down.

Firebrand is a flamewaker student enrolled in Scholomance Academy.

Flamewakers are ruthless servants of Ragnaros. Little is known about flamewakers. They are creatures not purely of fire. They are fiery elementals, but their bodies are flesh and blood. A flamewaker has a humanoid torso with long muscular arms which rests on a serpentine body; the creature's elongated head has a distinctively demonic quality. Its body is mostly covered with yellow or red scales, though a broad strip of grayish scales runs from its chest down the front of its body. Thick spikes range from 1 to 3 feet long protrude from its shoulders, arms, and tail. Few of these fiery harbingers remain following Ragnaros' defeat in the Firelands.