This article is using {{Card template}}.
See Help:Style guide/Card for how to edit this kind of article.
Edit this article
Fire Sale
64423 • SW_107
Regular 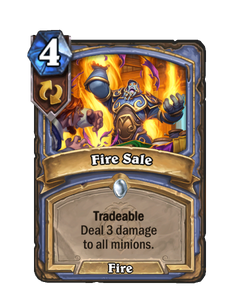 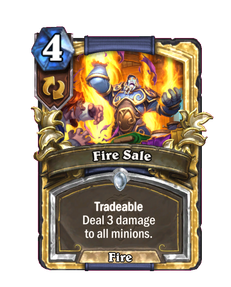 Everything is 50% off now that our warehouse burned down.

Fire Sale is a common mage spell card, from the United in Stormwind set.

Fire Sale can be obtained by:

Fire Sale is a more expensive version of Volcanic Potion with the addition to Tradeable.

It can be used to remove early-game boards or if the opponent isn't playing a minion-based deck, this can be traded for another card instead.

Fire Sale works with Sorcerer's Gambit questline as its final reward makes this a powerful board clear or a way to fufilll the Fire requirement. It also can be slotted into Control Mage archetypes as a way for a board clear or as another way to draw a card with its Tradeable Effect.

Prestor Pyromancer can increase the damage Fire Sale can deal and it does not require the minion to be alive for its bonus Spell Damage.