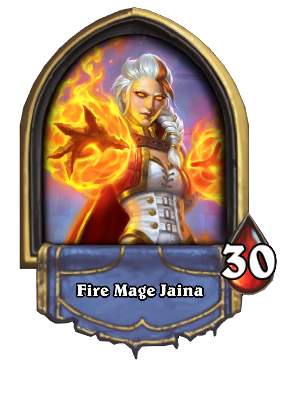 Fire Mage Jaina is an alternate hero for the

Mage class. It is obtained by winning 1,000 Ranked, Arena, or Duels games as mage.

Fire Mage Jaina is based on Jaina Proudmoore's appearance in Battle for Azeroth, albeit a version of her focused on fire magic rather than her usual frost- and water-based magic.

When viewed in the collection, Fire Mage Jaina has the following flavor text:

After many years of careful study, Jaina realized that switching to fire spec would save on her heating bill. Obtained from winning 1,000 games as mage in Ranked, Arena or Duels.

All 1,000 Win heroes use the same emotes as the basic hero. For a list, see Jaina Proudmoore#Emotes.