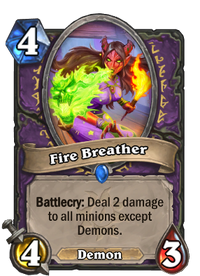 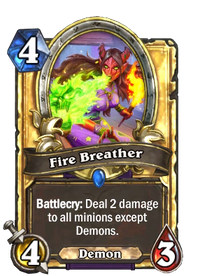 Battlecry: Deal 2 damage to all minions except Demons.
Flavor text

"Phew! That skull has been stuck between my teeth for hours!"

Fire Breather is a rare warlock minion card, from the Madness at the Darkmoon Faire set.

At first glance Fire Breather may not look like much, with an under-statted body and a Battlecry which damages friendly minions as well as enemy ones. However, compared to Demonwrath, generally considered a powerful card, this represents an additional 4/3 in stats for only one Mana, which makes it a great fit for most Control Warlock decks.

Its Demon tag is both a blessing and a curse. On one hand, it can be tutored out with cards such as Sense Demons or Free Admission as early as turn 3, and played on the next turn. It also has other Demon synergies which can be relevant, such as with Demonfire. On the other hand, it can be a drawback when used with cards such as Voidcaller, Kanrethad Prime, or even Bloodreaver Gul'dan. Although these cards are generally good in the types of decks that would run Fire Breather, their summoning effects negate its Battlecry, and its stats do not make up on their own for it.

Overall, though, this is a good tempo or control card. While it can backfire, when played correctly, it is an extremely useful removal tool, especially against early Aggro decks such as Odd Paladin, Murloc Paladin, or Murloc Shaman. Note that it is also possible to run Fire Breather alongside other board clears, like the aforementioned Demonwrath, providing certain decks with some needed redundancy.

Fire Breather is a Man'ari eredar.

Demonic eredar, described with the term man'ari (pronounced man-ah-ree), are eredar that have been turned into demons by the Burning Legion. 13,000 years ago, the Dark Titan Sargeras bathed the eredar in his fel might, and turned them into demonic members of the Burning Legion.

The man'ari now act as some of the most powerful weapons in the Burning Legion's arsenal. Skilled sorcerers in both fel and shadow magics, they are often found in command of contingents of demon forces. When facing eredar of great power, large armies are useless for the most part. Their corruptive powers over mortal souls are such that only the strongest-willed can even stand face to face with them.

"Man'ari" is an Eredun term that translates to "unnatural beings". It was originally described as a word with no specific translation, use to describe something considered "horrifically wrong, something twisted and unnatural and defiled". "Man'ari" is most often used by the draenei to describe the eredar followers of Kil'jaeden and Archimonde, as the draenei believe that these demonic minions are no longer recognizable as true eredar. However, some demonic eredar also appear to refer to themselves as "man'ari", and usage of it as a species name to refer to the eredar of the Burning Legion can be considered grammatically correct as Kil'jaeden appropriated the term for his own use, though the man'ari mostly refer to themselves simply as "eredar". The draenei no longer call themselves eredar, likely because the name is mostly associated with the demonic man'ari.