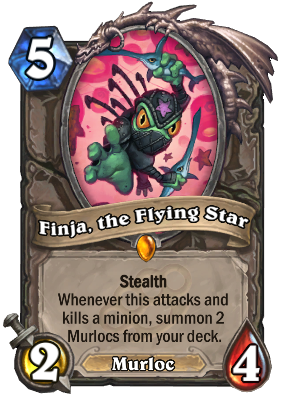 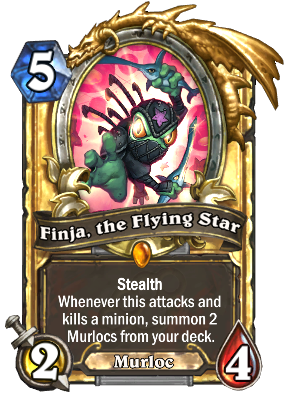 Stealth. Whenever this attacks and kills a minion, summon 2 Murlocs from your deck.
Flavor text

The last true master of Finjitsu.

Finja, the Flying Star is a legendary neutral minion card, from the Mean Streets of Gadgetzan set.

Finja, the Flying Star can be obtained through Mean Streets of Gadgetzan card packs, or through crafting.

Finja's designation as a Murloc and effect make him best suited for a deck and class that can provide adequate tribal and buffing support, as he has poor stats for his considerable Mana cost. An ideal scenario is for him to pull out a combination of Murloc Warleader, Bluegill Warrior or Old Murk-Eye for extra buffs and burst damage. However, Finja will likely require friendly buffs to his Attack as he is typically less capable of dealing fatal damage to undamaged minions by the time he can attack. Paladins can increase his Attack with various effects, from Blessing of Kings to an assortment of Grimy Goons cards, while Shamans can keep him lying in wait until they can pull off a copy of Everyfin is Awesome, possibly backed up by Call in the Finishers. Druids can get Finja out earlier with Innervate and Wild Growth, making it harder for opponents to deal with him.

"Members of the Jade Lotus family excel in the ancient arts of stealth, assassination, and turning murlocs into finjas. Yeah, I said finjas. Don’t give me that look. I didn’t come up with that name."[1]

Finja is unique to Hearthstone. He is the deadliest assassin in Gadgetzan, and "the guy you hire when you need the job done right with no witnesses left behind". The goods news is that he will work for fish. He is a master in the ancient art of "finjitsu", and his ability represents him picking two murlocs from the player's deck that he deems worthy of training in finjitsu.[2]

The Gadgetzan Gazette Volume 32 #9 features an advertisement for "Finjitsu International" ("For murlocs. By murlocs.") offering to teach MMA (Murloc Martial Arts) in a "judgement free and suitably moist dojo". Finja himself is not mentioned by name, though the advert instead notes that "Our instructors are experienced warleaders who teach proven real world techniques".