This article is using {{Card template}}.
See Help:Style guide/Card for how to edit this kind of article.
Edit this article
Final Showdown
64375 • SW_039
Regular 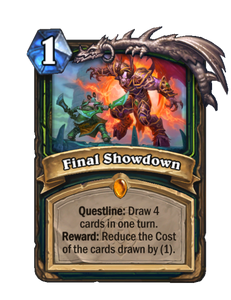 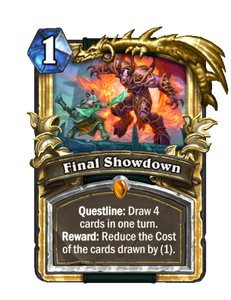 Final Showdown is a legendary demon hunter spell card, from the United in Stormwind set.

Final Showdown can be obtained by: 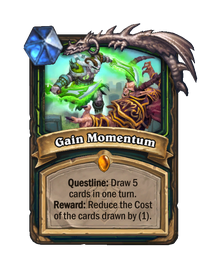 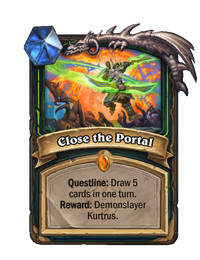 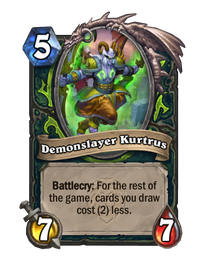 A very difficult requirement that requires to player to draw 4/5/5 cards in one turn. However there are a number of cards that can alleviate the requirements. Playing Glide can simply finish parts of the questline. There are options to fulfill the quest such as Acrobatics, Sigil of Alacrity, Consume Magic, Double Jump, Crimson Sigil Runner, and cards that provide Soul Fragments. The player can get extremely unlucky though if they do not draw any of their card draw which will result in the requirements being reset and all their effort gone to waste for that turn. To make the final reward much more usable,

Tradeable Cards, when shuffled back into the deck, also count towards the requirements as well in case the player should not have any other card draw available. Notable ones are Persistent Peddler, Guild Trader, Impatient Shopkeeper, and etc.

The first two rewards are very powerful as it can reduce up to 4/5 cards from first and second part of the questline drawn by 1. Because of this, it can help finish the quest later or allows players to play multiple low cost cards early game. Do note that the final questline does not award cost reduction to your hand but instead award Demonslayer Kurtus

Cards like Lion's Frenzy and Irebound Brute can be included in these decks because it revolves around drawing X cards in one turn which benefits their value.

Once Demonslayer Kurtus is played, from here on out, every card drawn will cost 2 less which makes big minions or combo pieces of cards much easier to pull off. With this, the player can now start playing more of their important cards during their turns.

All of the strategies mentioned earlier will apply to post-Demonslayer Kurtus. However depending on your remaining cards in the deck, the final reward may not be benefitable since the player would be drawing most of their cards and they would be in fatigue much faster. To offset the remaining cards in the deck, the player is recommended to add cards that indirectly remove them from the deck such as Glide, Soul Fragments, or Tradeable cards.

Glide can refresh your hand with 4 cards with 2 mana discount.

Should Druid ever play Celestial Alignment, the player can play all of their cards drawn from the deck for absolutely free

This card depicts Kurtrus Ashfallen trying to take down Anetheron, a dreadlord who was summoned by Tamsin to attack Stormwind City.