This article is using {{Card template}}.
See Help:Style guide/Card for how to edit this kind of article.
Edit this article
Fight Promoter
40617 • CFM_328
Regular 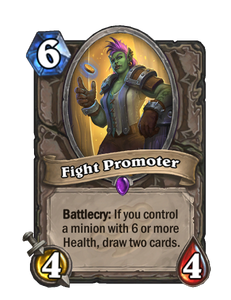 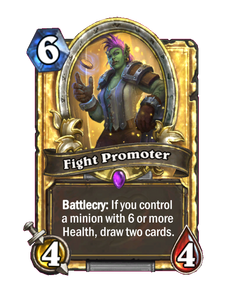 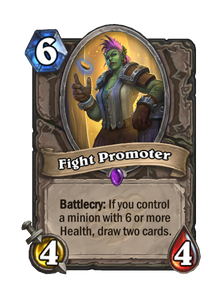 Fight Promoter is an epic neutral minion card, from the Mean Streets of Gadgetzan set.

This card provides low stats, so it needs the card draw effect to activate to become good. At a quick glance, this card's Battlecry seems difficult to activate. Most minions with sufficient Health are late game and need to survive the turn to activate Fight Promoter, which can be difficult without a significant tempo advantage, or at least without an empty board. However, there are a few high Health minions that are cheap enough to be played on the same turn, like Public Defender or Priest of the Feast.

However, because the Fight Promoter's Battlecry can actually activate from itself, this card has a better chance of activating its card draw in a handbuff deck.