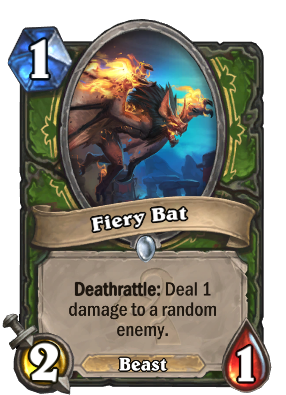 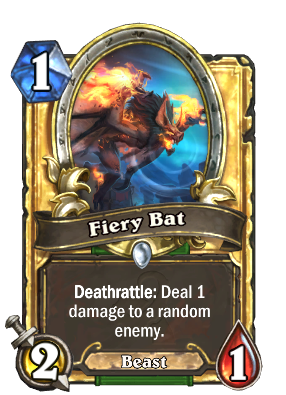 He'll always be our first.

Fiery Bat is a common hunter minion card, from the Whispers of the Old Gods set.

Fiery Bat can be obtained through Whispers of the Old Gods card packs, or through crafting.

This minion's effect may hit any enemy character, including minions, which gives it more of a control element; in the best of cases, it could eliminate a small minion such as a Silver Hand Recruit, or a larger, weakened minion. Feign Death allows you to trigger this minion's damage effect immediately, which when combined with an attack could help eliminate a minion with more Health. It is also supported by the minions Forlorn Stalker, which can turn it into a formidable 1 mana 3/2 minion, and Princess Huhuran, who like Feign Death can help you get off a quick shot of 1 damage.

Being a Beast, it is also a cheap and easy activator for Ram Wrangler, Kill Command or Starving Buzzard, alongside the Hunter's plethora of other Beast-related cards. This makes Fiery Bat highly compatible with either a Deathrattle-focused deck (alongside cards such as Infest and Explorer's Hat), a Beast-focused deck, or a fusion of the two.

Bats are nocturnal, flying mammals that are found in all regions of Azeroth. These foreboding creatures stalk the night skies of the Eastern Plaguelands, feeding on carrion.

Tirisfal batlings can sense an opponent's heartbeat through echolocation. Vampire bats have been trained as scouts and mounts by the Forsaken of the Undercity and the Amani trolls of Zul'Aman. The Forsaken also use bat wings to make armor. The Highborne used monstrous, elusive bats known as shadowbats as mounts during the War of the Ancients.

Bats are found in the Tirisfal Glades, Blackrock Depths, Shadowfang Keep, Zul'Gurub, Razorfen Kraul, Eastern Plaguelands, Ghostlands, Karazhan, and Uldaman. The monstrous, flesh-eating bloodwing bat hails from the misty jungle islands of the South Seas, where it is the undisputed ruler of the night sky.

Many bats can also be found in areas around Draenor, such as Frostfire Ridge, Zorammarsh in Tanaan Jungle and the depths of the Shadowmoon Burial Grounds. The vampire bats known as echo hunters, who dwell in the woods of Spires of Arak, don't use their eyes to hunt and can hear travelers approaching from a mile away. The forces of the Shadow Council sometimes use bats as mounts.