This article is using {{Card template}}.
See Help:Style guide/Card for how to edit this kind of article.
Edit this article
Felstalker
592 • EX1_306
Regular 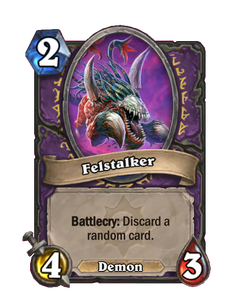 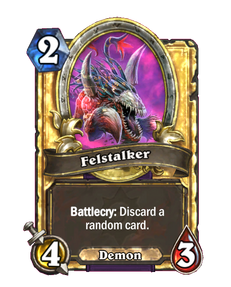 This puppy chews up cards instead of shoes. 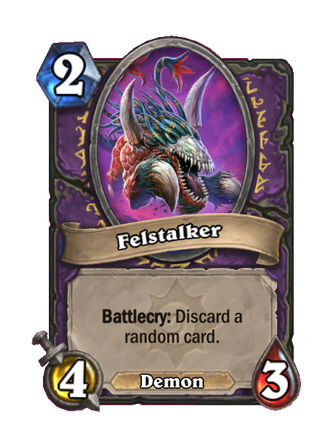 "Succubus" redirects here. For the removed minion this replaced, see

Felstalker is a warlock minion card, inducted into the Legacy set, formerly from the Basic set. 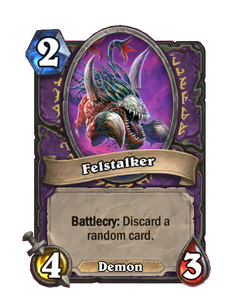 Regular and golden Felstalker are uncraftable and cannot be crafted or disenchanted.

Felstalker sacrifices card efficiency for a lower mana cost, so it is often played in aggressive decks that focus on winning the game early. One could also choose to hold off from playing the Felstalker until it's the only card in hand to avoid the discard entirely.

Felhounds (also known as fel hounds, felbeasts, hellhounds, manastalkers, fel demons and felstalkers) are ugly, red, spined creatures from the depths of the

Twisting Nether. Felhounds are demon hounds used by the pit lords to sniff out sources of magic wherever they be found. Felhounds, who feed upon magic itself, are fond of draining the energies of hapless wizards and then ripping their bodies to shreds. They serve as the forerunners of the Burning Legion.

The card now named Felstalker was originally called Succubus, depicting a female member of the demonic sayaad species, with corresponding voicelines, art by Matt Dixon, and the flavor text "Warlocks have it pretty good". In patch 14.6.0.31761, Succubus was renamed to Felstalker, with new card art, voicelines, and flavor text to reflect the card's new identity.