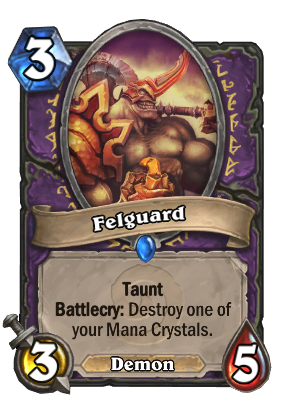 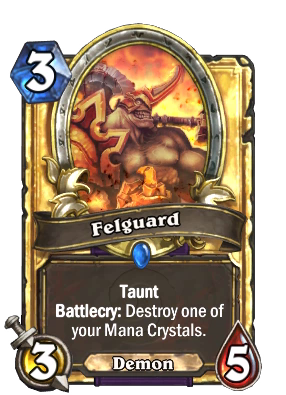 Taunt
Battlecry: Destroy one of your Mana Crystals.
Flavor text

Yes, he'll fight for you. BUT HE'S NOT GOING TO LIKE IT.

Felguard is a rare warlock minion card, inducted into the Legacy set, formerly from the Classic set. 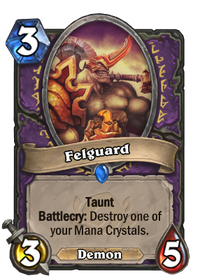 Felguard can be obtained through Classic card packs, or through crafting.

Unlike the Overload ability that appears on some shaman cards, the Battlecry on this minion permanently destroys one of your mana crystals, essentially setting you back one full turn of mana development for the rest of the game. Players will need to decide if this is worth the slightly undercosted minion you receive in exchange. Felguard can be directly compared to Sen'jin Shieldmasta; additional demon-related synergy aside, Felguard is therefore essentially a 4-mana minion for the price of 3. Without substantial card synergy, this makes the Felguard's battlecry a strong disincentive from playing him.

If played after Turn 10, you will not lose a Mana Crystal the next turn so you bypass the negative effect of this card.

Summon
I will enjoy watching you die.

Attack
Too pathetic to fight your own battles?

The Felguard is a warlock minion from World of Warcraft. Available only to Demonology warlocks, the Felguard is a strong warrior-like minion with a charge, ranged stun and AoE attack. As a particularly powerful demon, the Felguard is represented as being barely under the control of the warlock, and will occasionally make remarks regarding his plans for the warlock's demise as soon as he breaks free of his control.

The felguard are the Burning Legion's race of rank and file demonic soldiers conscripted from the mo'arg species. The felguard operate under the direction of doom guards, pit lords, and other Legion commanders and generals. Felguard are treated like fodder troops, driving the Legion's attack on the universe forward like a relentless force of nature. While most other demons rely to some extent on magic and trickery, felguard eschew these subtleties, instead relying on sheer strength to overwhelm their foes. While under the command of a higher-ranking demon or a warlock, a felguard makes the perfect soldier. Each is a disciplined follower outside of combat, calm and patient. When commanded to fight however; they become wild and merciless, an army of raging felguard is a terrifying sight.