This article is using {{Card template}}.
See Help:Style guide/Card for how to edit this kind of article.
Edit this article
Fel Summoner
59864 • BT_509
Regular 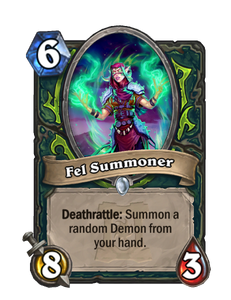 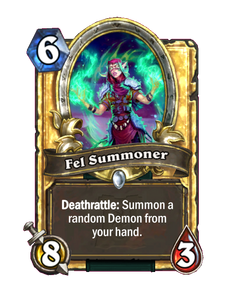 Fel Summoner is a common demon hunter minion card, from the Ashes of Outland set.

Despite the identical ability, Fel Summoner is no Voidcaller. The additional 2 mana and lack of synergy cards like Sacrificial Pact and Dark Pact make this card much harder to get value from. Its impact doesn't lie in its ability to cheat mana, but rather the threatening Attack and potentially problematic Deathrattle. 8 damage is too much to leave on the board, meaning your opponent is likely to kill the Fel Summoner on their turn and attempt to deal with whatever spawns, rather than simply ignore it like they can for a Voidcaller.

One of the benefits of Fel Summoner is pulling a large Demon out of the hand, making way for buried Outcast cards to be cast.

Good targets to cheat out include Pit Commander, Hulking Overfiend, and Priestess of Fury. Be careful using cards like Witchwood Piper and Sightless Watcher, since pulling these not only puts bad stats in play but also prevents their useful Battlecries.