This article is using {{Card template}}.
See Help:Style guide/Card for how to edit this kind of article.
Edit this article
Fel Orc Soulfiend
40389 • CFM_609
Regular 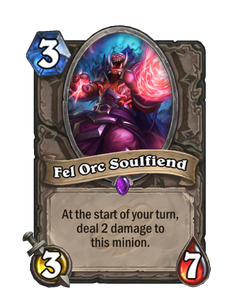 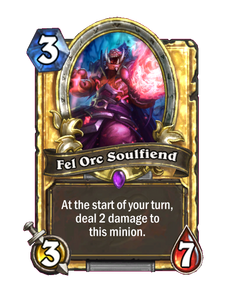 "Doc says the persistent burning sensation in my soul is probably just an ulcer." 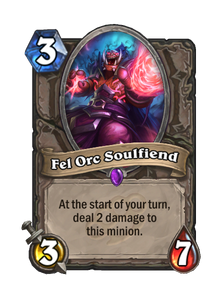 Fel Orc Soulfiend is an epic neutral minion card, from the Mean Streets of Gadgetzan set.

If played on curve, this minion effectively becomes a 3/5 minion when it is able to attack. Conversely, the opponent only needs to do 5 damage, and the minion will kill itself at the start of your turn. But as dealing 5 damage in the early game is not easy, playing this on curve usually trades at least 2 for 1. A good use for this card is to combo it with a Silence effect to prevent it from dealing damage to itself.

This minion's ability to deal damage to itself synergies with various Warrior cards, such as Armorsmith, Frothing Berserker and Rampage. Its high base health can allow for Priest synergies such as Inner Fire, or find a place in a Purify deck. In addition, the Priests Hero Power can also counter the self-damage of this minion.

The fel orcs are members of the orcish race who have been completely consumed by madness and bloodlust due to the continual consumption of pit lord blood. Most can be found in Outland, loyal to the Fel Horde and the Illidari, though after the alternate Gul'dan took control of the Iron Horde and bound it to the Burning Legion, many orcs of the alternate Draenor became fel orcs as well.

The Outland fel orcs are created by the Fel Horde using the blood of the captured pit lord Magtheridon, and are easily distinguishable from regular orcs by their red skin, glowing red eyes, longer tusks and the spiky growths all over their body. The alternate Draenor fel orcs are simply the result of orcs drinking the blood of Mannoroth, and instead feature gray and black skin and mutations.