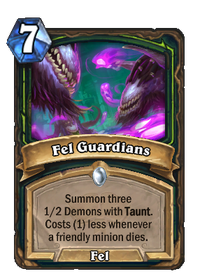 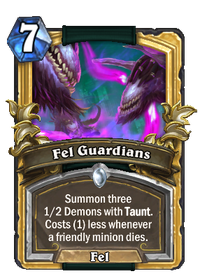 What happened after the guardians tripped? They Fel.

Fel Guardians can be obtained through Scholomance Academy card packs, through crafting, or as an Arena reward. 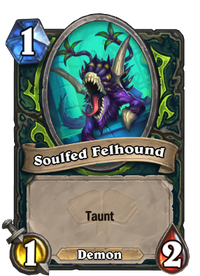 On its own, without any help from the cost reduction, summoning three 1/2 Taunt minions is not worth 7 mana. Each individual demon summoned can be removed without much effort at turn seven if both players are doing at least close to equally well. It is also outclassed by other cards at it's default cost, notably Feral Spirit which has more stats for lower cost. However, the key to this card is in it's effect, which reduces it's cost for every friendly minion that dies when it is in your hand. Great ways to do this include sticky cards that can count as multiple deaths for a single card, as well as Demon Hunter's cards that summon multiple 1/1 rush minions such as Command the Illidari. At this card's best, it can be used to summon multiple taunt minions that can give you extra time or protect your more threatening cards for free or close it it, allowing you to quickly swarm the board.

Of course, this comes with the downside of needing your own minions to die, as well as how slow this card works without the right synergy because of the high initial cost. Additionally if you draw this late in the game it can be hard to get this card to work when most of your cards that would work with have already been used. Even when you play this card at a very low cost, In the right situations it can be quite useful, but in others it can be very hard to play efficiently.