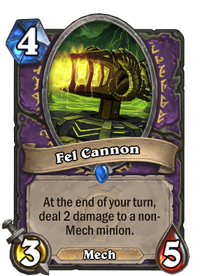 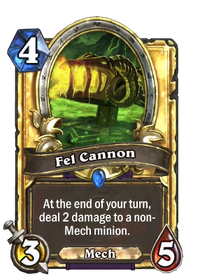 At the end of your turn, deal 2 damage to a non-Mech minion.
Flavor text

Fel Cannon is a rare warlock minion card, from the Goblins vs Gnomes set.

Fel Cannon can be obtained through Goblins vs Gnomes card packs, or through crafting.

Good in Mech decks, where the Cannon will fairly reliably hit the opponent's minions, and not the controlling player's. Alternatively, it can be used for the chance to target your own minions, such as Nerubian Egg or Gurubashi Berserker. A poor choice for Mech synergy with non-Mech cards such as Cogmaster and Tinkertown Technician, due to the chance of the Cannon hitting those minions.

Other Mechs aside, this minion gives an advantage to the player with the fewest minions, since the other player's minions will likely be the target of the Cannon's ability. This can make it a good card for clearing or weakening the enemy board. In its base stats the Cannon is a fairly sturdy 3/5 minion which has a good chance of trading favorably. Combined with its ability, this can allow the Cannon to trade for several weaker enemy minions.

"The Burning Legion has no need for ammunition like cannonballs. The demons utilize far more potent weaponry." - Dralor

Fel cannons are cannons infused with fel energy and used by the Burning Legion to protect territory they have claimed for themselves. They shoot fel cannonballs, but have a boiler grill on the front instead of a barrel.