This article is using {{Card template}}.
See Help:Style guide/Card for how to edit this kind of article.
Edit this article
Feign Death
1991 • GVG_026
Regular 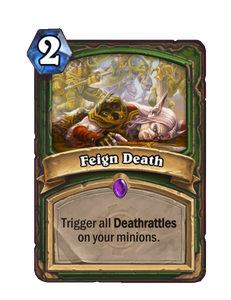 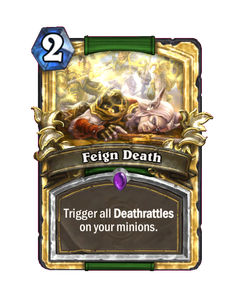 The hardest part about doing a "Feign Death" convincingly is learning how to make the right smell. It takes a lot of commitment. 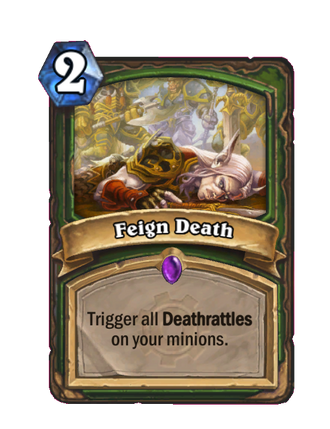 Feign Death is an epic hunter spell card, from the Goblins vs Gnomes set.

Feign Death is useful in decks focused on Deathrattle effects. It allows Hunters to activate Deathrattles on command without having to destroy the minion first. Targets like

Exploding Bloatbat are good for utility, while cards like

Sylvanas Windrunner give immediate board advantage. Note that Deathrattles that can only activate on the opponent's turn like

One of the challenges posing for this card is the difficulty in maximizing its effect. Having enough strong Deathrattle minions on board while also having the mana to use this card is not always feasible, especially if your opponent anticipates it. In some cases, it might be optimal to use it even on a single Deathrattle minion.

Play Dead is a cheaper, single-target version of Feign Death. While it only affects one minion, its lower cost makes it more flexible to use.

Princess Huhuran do the same, but come with a body. One case where Feign Death can be more useful compared to other single-target Deathrattle activators is in

Goblin Bomb decks, since various cards summon multiple of them and they tend to stick on the board.

Feign Death is a hunter ability from World of Warcraft that causes the hunter to fall to the ground as though they had died. Computer-controlled enemies will have their aggro against the hunter reset and immediately cease to attack them, while players will automatically de-target the hunter. The hunter's display will also appear to show that the hunter has died.

Feign Death is mostly used for reseting aggro against mobs, allowing the hunter to avoid reprisals from an overly aggravated boss or simply to abort a bad pull. If the mob has any other target on their threat table at the time, they will immediately switch to the next highest priority. This allows the hunter to build excessive aggro before then using Feign Death to return control to the tank. Feign Death is also useful in PvP to interrupt casts and throw-off enemy pets and minions, but can be recognised by other players by the survival of the hunter's pet; if the hunter is truly dead, the pet will despawn, while if they are simply feigning death, the pet will remain active.