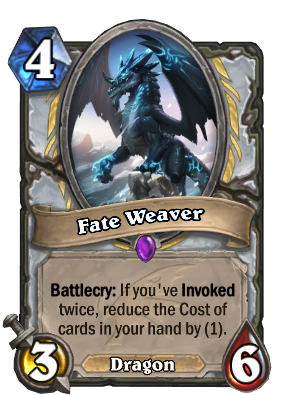 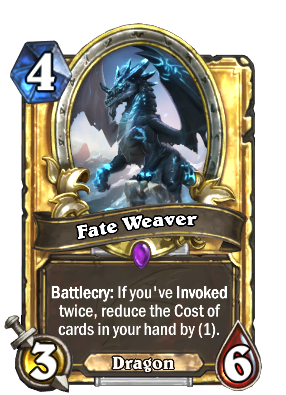 Battlecry: If you've Invoked twice, reduce the Cost of cards in your hand by (1).
Flavor text

Do not draw the attention of a Fate Weaver, for it will always loom over your destiny.

Fate Weaver is an epic priest minion card, from the Descent of Dragons set.

Fate Weaver can be obtained through Descent of Dragons card packs, or through crafting.

Fate Weaver is a powerful source of card discounts, while being cheaper and having an immediate effect over Emperor Thaurissan. Galakrond decks don't naturally lend themselves to OTK combos, making Fate Weaver most useful as a simple source of value. It can be played after a large Sethekk Veilweaver turn or after a few uses of Galakrond's Wit, reducing the randomly-generated cards. It can also allow things like a hero power after Plague of Death or a Murozond the Infinite play followed by several removal spells. At ten mana, you can play Fate Weaver followed by any 7-mana card, such as a Soul Mirror to retake the board.

With a 3/6 body for four, Fate Weaver is a decent tempo play in a pinch, even while not Invoked. While not ideal, having a high-health body to trade can be the difference between life and death against an Aggro Demon Hunter or Face Hunter. It's also a fantastic target for Apotheosis.

Fate Weaver can be used to set up one-turn-kill combos that are normally impossible. The downside is that not only do you need to run and play Invoke cards to activate its effect, you also need to put Galakrond, the Unspeakable into your deck. If you only care about Fate Weaver and none of the other Galakrond card effects, it may be better to run fewer Invoke cards.