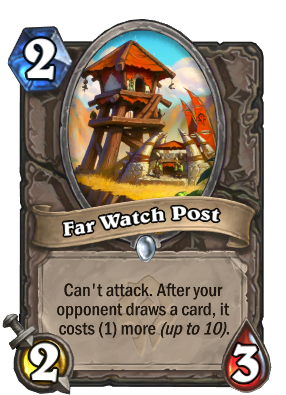 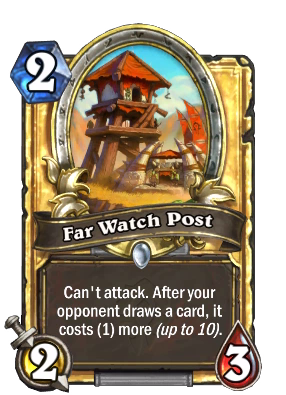 Far Watch Post is a common neutral minion card, from the Forged in the Barrens set.

Far Watch Post can be obtained through Forged in the Barrens card packs, through crafting, or as an Arena reward.

Far Watch Post is a strong early game minion. With the Coin, it can be played as early as turn 1 and can slow the opponent in gaining tempo. It has superior stats for its mana cost and may prove difficult to remove from the battlefield.

Far Watch Post is a small Horde outpost located just west of the bridge between Durotar and the Northern Barrens. It contains a watch tower, an orc burrow and a few catapults. A riding wolf pen watched over by a pair of peons is located directly south.

Although not an accommodating spot, the outpost is vital for the protection of supply caravans, as well as keeping Durotar safe from Alliance and quilboar threats.

During the Burning Legion's invasions, the outpost fell under the Legion's control. Several of its residents were enslaved by nathrezim and were either killed or rescued by the defenders.