Hearthstone Wiki
Register
Don't have an account?
Sign In
Advertisement
in: All cards, Wild format cards, Pages with no result queries, Orc art

This article is using {{Card template}}.
See Help:Style guide/Card for how to edit this kind of article.
Edit this article
Far Sight
818 • CS2_053
Regular 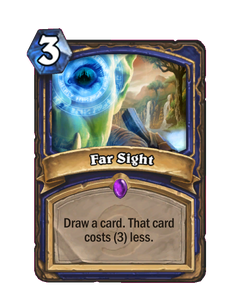 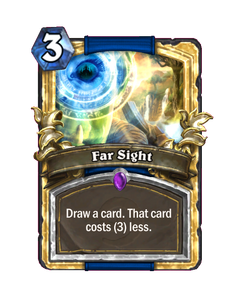 Drek'thar can't see, but he can see. You know what I mean? It's ok if you don't. 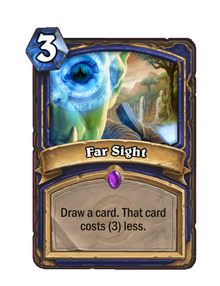 Far Sight is an epic shaman spell card, inducted into the Legacy set, formerly from the Classic set. 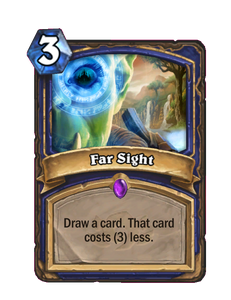 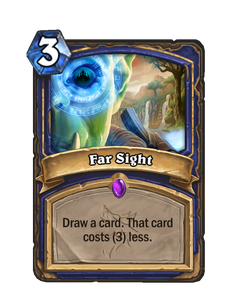 Useful in shaman decks with a majority of cards that cost 3 mana or more. It allows the shaman to get to the cards in their deck faster but forces them to play the card drawn or waste the mana spent on this spell. Especially effective for summoning high cost minions early in the game.

Far Sight is an ability of the Far Seer from Warcraft III which allowed the Far Seer to reveal areas of the map hidden by fog of war. It was later adapted into a shaman spell in World of Warcraft which allows the shaman to view faraway locations. The shaman can use the spell to shift their viewpoint to any spot they can see and click on, and by recasting the spell while it is already in operation, can progressively jump their viewpoint an unlimited distance from their character. Prior to the introduction of flying throughout Azeroth with Cataclysm, Far Sight was one of the only ways to view hidden areas in Kalimdor and the Eastern Kingdoms.