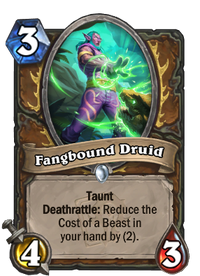 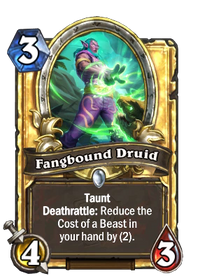 Taunt
Deathrattle: Reduce the Cost of a Beast in your hand by (2).
Flavor text

Bound by the law of the fang, these druid floss their teeth twice a day.

Fangbound Druid is a common druid minion card, from the Wailing Caverns mini-set.

Fangbound Druid can be obtained through Forged in the Barrens card packs, through crafting, or as an Arena reward.

Fangbound Druid is a Druid of the Fang.

The Druid of the Fang were a group of druids found in the Wailing Caverns. Once part of an order of noble druids, the group, led by Naralex, sought to use the Caverns' underground springs to restore the Barrens to the lush and fertile land that it once was, using the power of the Emerald Dream.
However, once connected to the Dream, the druid's vision somehow became a nightmare, and began to corrupt and transform the Caverns and its denizens. Naralex and his druids were transformed into the Druids of the Fang, and began seeking to remake that land to match their own, twisted dreams. They were eventually defeated by a group of adventurers.