Hearthstone Wiki
Register
Don't have an account?
Sign In
Advertisement
in: All cards, Wild format cards, Pages with no result queries, Ghoul art

This article is using {{Card template}}.
See Help:Style guide/Card for how to edit this kind of article.
Edit this article
Fan of Knives
667 • EX1_129
Regular 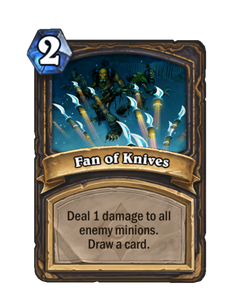 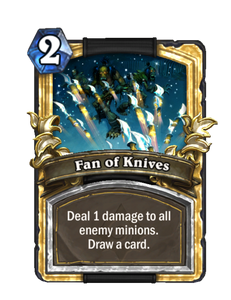 I wouldn't say I LOVE knives, but I'm definitely a fan. 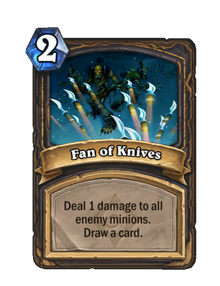 Fan of Knives is a rogue spell card, inducted into the Legacy set, formerly from the Basic set. 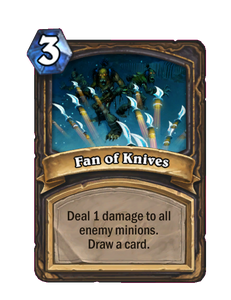 Regular and golden Fan of Knives are uncraftable and cannot be crafted or disenchanted.

This spell has two steps:

Fan of Knives presents one of the few ways for Rogues to deal damage to several enemy minions (area of effect). It can be comboed with Spell Damage and can clear an enemy board of minions with low health very effectively.

Many Rogue archetypes, for example Miracle Rogue, rely heavily on card draw. The Rogue spell Preparation can be used in conjunction with Fan of Knives for powerful tempo turns.

Fan of Knives is a rogue ability from World of Warcraft. It deals area of effect damage in a radius around the caster.

This card's art depicts the spell being cast on a pack of ghouls, undead minions of the Scourge.