This article is using {{Card template}}.
See Help:Style guide/Card for how to edit this kind of article.
Edit this article
Fal'dorei Strider
43228 • LOOT_026
Regular 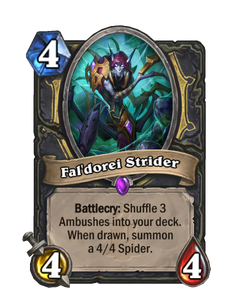 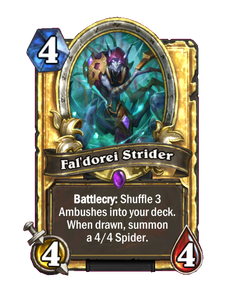 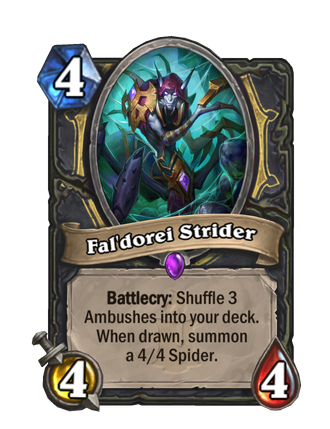 Fal'dorei Strider is an epic rogue minion card, from the Kobolds and Catacombs set. 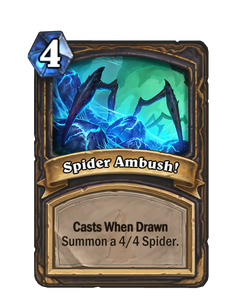 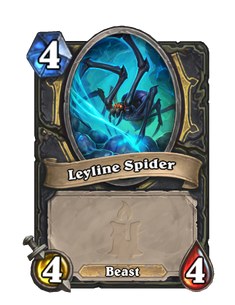 Fal'dorei Strider is a reasonable body that can create up to 16/16 in stats over the course of the game. The effect is similar to

Beneath the Grounds, but it's far easier for the player to cycle through their own deck. Rogue has access to good card draw such as

Fan of Knives, and

Elven Minstrel as well as great

Gadgetzan Auctioneer synergy. This is a strong card for any deck that can draw the spiders out, mainly control decks but Miracle Rogue in particular.

When playing against this card, it might be a good idea to save board clears for after some spiders have been summoned. This will prevent the Rogue from potentially reloading their board for no mana.

The fal'dorei are a race of former elves found in Suramar. Many years ago, exiles from Suramar City came to Falanaar. Valewalker Farodin took pity on them and gifted them with an arcan'dor tree. For a time it sustained them and they were safe, but it did not last forever. The arcan'dor became unstable and died, and in a flash of wild magic the elves were twisted into spider-like creatures, becoming the fal'dorei. Now they live in the tunnels beneath Falanaar and were after the arcan'dor seed protected by Farodin. The fal'dorei intended to use its power to return to the surface.