This article is using {{Card template}}.
See Help:Style guide/Card for how to edit this kind of article.
Edit this article
Faerie Dragon
609 • NEW1_023
Regular 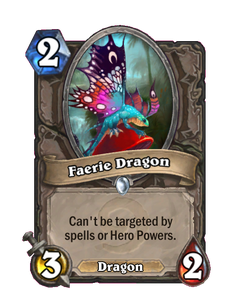 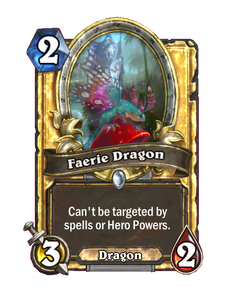 Adorable. Immune to Magic. Doesn't pee on the rug. The perfect pet!

Faerie Dragon is a common neutral minion card, inducted into the Legacy set, formerly from the Classic set. 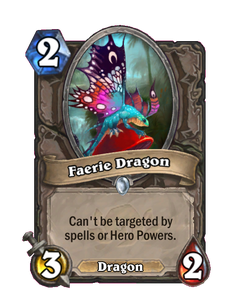 Faerie Dragon is a decent 3/2 for 2 mana, but is most desirable for the 'elusive' ability, shared with only a few other minions such as Spectral Knight. The ability prevents the Faerie Dragon from being targeted by any spells or hero powers, regardless of which player is using them.

However, the Faerie Dragon can still be targeted by physical attacks, and effects such as Battlecries (eg. Stormpike Commando). They can also be hit by AoE and non-targeted spells such as Flamestrike and Arcane Missiles. Note that the restriction only applies to the direct effect of the spell or hero power, and not the use of abilities or minions generated by it. In practical cases, this means that the only hero powers the Faerie Dragon is protected from are the mage's Fireblast, Zul'jin's Berserker Throw, and in situational cases, the priest's Lesser Heal, Mind Spike, and Mind Shatter, and the hunter's Steady Shot with a Steamwheedle Sniper in play - Attack bonuses, weapons and minions created by spells and hero powers do not count, and the Faerie Dragon will not be protected from them.

The Faerie Dragon's ability can still provide a substantial advantage, in preventing the opponent from removing it using spells. This can be very effective in the early game for preventing the use of early removal spells such as Frostbolt, Shadow Word: Pain and Wrath. If the opponent lacks minions with which to respond, this can allow the Faerie Dragon to deal damage unopposed for several rounds. Taunts can also be very effective in protecting the Faerie Dragon and allowing it to survive for as long as possible. The ability can also be used to interfere with the opponent's plans. For example, by placing a Faerie Dragon between two other minions, the player can prevent a mage from targeting all three of them using Cone of Cold.

The obvious downside to the Faerie Dragon is that it cannot be targeted by your own spells or hero powers either, which can prevent it from being buffed or healed. However, note that it can still be affected by effects such as Battlecries and auras. The Faerie Dragon is a good target for Battlecry buffs from minions like Shattered Sun Cleric and Dark Iron Dwarf.

In general, the Faerie Dragon is effective against classes which rely on spells or Fireblast for removal. Its stats won't allow it to withstand too much combat, but its ability can cause it to become a thorn in the side of the opponent, especially if played during the early game. It is less effective against weapon decks, and those featuring lots of minions.

Tempo Dragon decks can also make use of Faerie Dragon's type. It has an atypically low cost for a dragon, making it a decent minion in the early game and a valuable trigger later in the game.

Faerie dragons, also known as sprites or blink dragons, are fey that look like flying lizards (much like a chameleon with butterfly wings). Though not actual dragons, these mystical looking creatures police the Emerald Dream from magic. As such they are immune to magic.