This article is using {{Card template}}.
See Help:Style guide/Card for how to edit this kind of article.
Edit this article
Faceless Shambler
38569 • OG_174
Regular 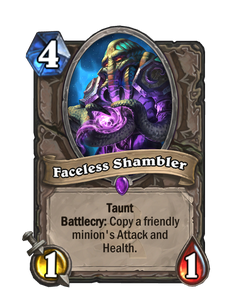 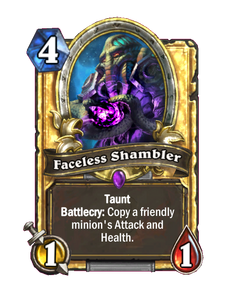 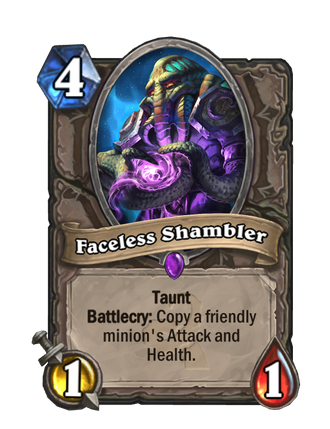 Faceless Shambler is an epic neutral minion card, from the Whispers of the Old Gods set.

This would fit well in a deck with large minions, giving a good chance of providing a high-stat target to copy. Copying a 4/5 or better would provide better than average stats, compared to 4 mana Taunts such as

Sen'jin Shieldmasta. Copying a larger target such as a 7/7 or 8/8 would provide excellent value, as well as a very solid Taunt. An excellent combo with a well-buffed

You can also buff your friendly minion and have those stats copied by this card. Temporary buffs work as well.

You should be wary of silences, as they will leave you with a mere 1/1. For instance, a single