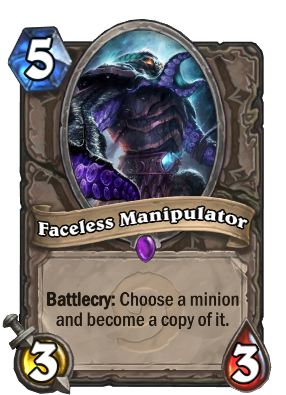 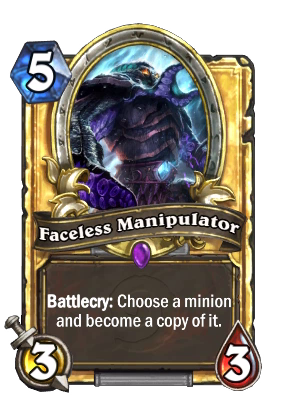 Battlecry: Choose a minion and become a copy of it.
Flavor text

The Faceless Ones are servants of Yogg-Saron, and they feed on fear. Right now they are feeding on your fear of accidentally disenchanting all your good cards.

Faceless Manipulator is an epic neutral minion card, inducted into the Legacy set, formerly from the Classic set. 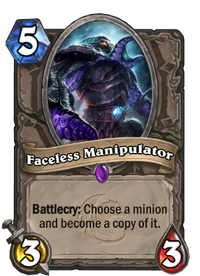 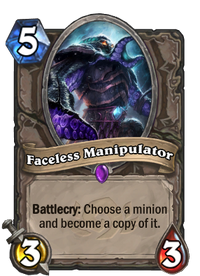 Faceless Manipulator can be obtained through Classic card packs, or through crafting.

Two copies of regular Faceless Manipulator (Core) are obtained for raising sum of all your class levels to 38.

Two copies of golden Faceless Manipulator (Core) are obtained for winning 2500 games across all classes.

Faceless Manipulator (Core) is uncraftable and cannot be crafted or disenchanted.

Faceless Manipulator can be used to copy powerful minions belonging to either the player or the opponent. This can be useful for duplicating the presence of legendary minions, or simply as a wildcard which can be changed into whichever target best serves the situation. When copying enemy minions, one strategy is to use the Faceless Manipulator to copy a valuable minion, before destroying or Silencing the target. This allows the player to effectively steal the opponent's minion.

Faceless Manipulator can be used on friendly targets to create large amounts of Spell Damage. For example, copying a friendly Malygos will create an additional 5 Spell Damage.

Faceless Manipulator is a faceless one.