This article is using {{Card template}}.
See Help:Style guide/Card for how to edit this kind of article.
Edit this article
Faceless Corruptor
55426 • DRG_076
Regular 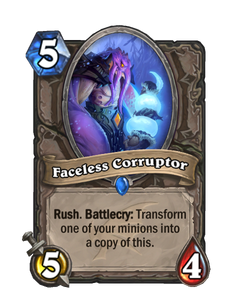 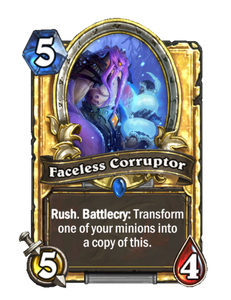 Dimensions: Full • 330 x 410px
Rush. Battlecry: Transform one of your minions into a copy of this.
Flavor text

What does Madame Lazul have against faces?! 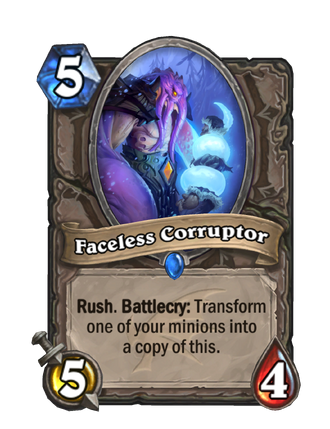 Faceless Corruptor is a rare neutral minion card, from the Descent of Dragons set.

Faceless Corruptor is an extraordinarily flexible piece of board control, as well as a respectable threat on its own right. With two sizable bodies, this card can remove one or two minions from your opponents board and often leave 4 or 8 attack in play. It can idealistically be seen as an 8/7 Rush when transforming a 1/1 minion, making instant use of 8 damage and placing an additional 7 health into play. Using any injured minion, especially one that has already attacked this turn, is still highly valuable. In a pinch, Faceless Corruptor can be played alongside any 1 mana minion for a solid use of 6 mana.

Even if your opponent doesn't have a great target to Rush into, it's still a good idea to play Faceless Corruptor on curve just for the sheer stats it provides.

If you suspect your opponent is playing Faceless Corruptor, it's important to keep their board clear of token minions. This prevents them from getting maximum value.

In Arena, Faceless Corruptor is an extremely powerful card. The combination of an acceptable body and the tempo of transforming a small minion in a limited format make Faceless Corrupter a must-drafted card.

This minion appears to be a N'raqi that corrupts others into becoming another faceless. The power of the Old gods has been shown to be able to change other creatures into faceless ones, such as when Samuel Williams was changed into Azshj'thul the Drowned.

Several different faceless have the title of Faceless Corruptor over the course of World of Warcraft's history, including ones in Nazmir and in Grim Batol.