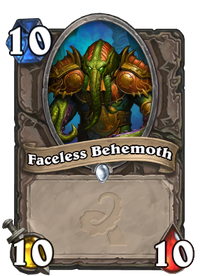 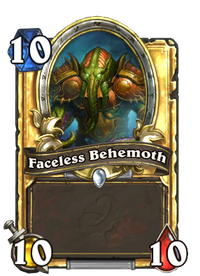 Faceless Behemoth is a common neutral minion card, from the Whispers of the Old Gods set.

Faceless Behemoth can be obtained through Whispers of the Old Gods card packs, or through crafting.

However, in situations in which this card must be played, it is best to first play one or more other, smaller, expensive minions to bait out removal that would otherwise negate this massive body.

As a 10 mana minion, this card has some synergy with Ancient Harbinger. Its large size makes it reasonable for use in decks using cards like Y'Shaarj, Rage Unbound or Varian Wrynn, but there are still far better (albeit harder to obtain) options.

Faceless Behemoth is a faceless one.