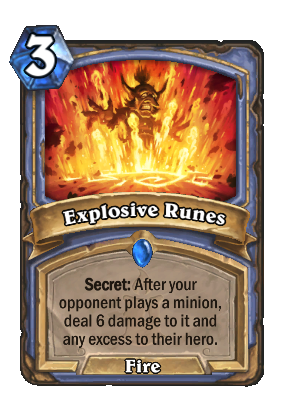 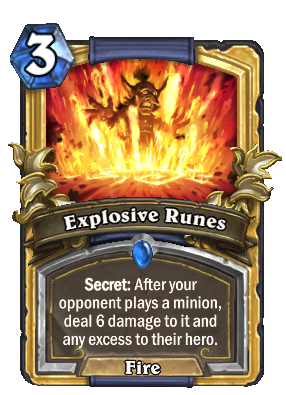 Secret: After your opponent plays a minion, deal 6 damage to it and any excess to their hero.
Flavor text

Sometimes it's safer NOT to read the warning signs.

Explosive Runes is a rare mage spell card, from the Kobolds and Catacombs set.

Explosive Runes can be obtained through Kobolds & Catacombs card packs, or through crafting.

This card is a powerful tempo-generating secret that packs removal and direct damage into one. The amount of damage it deals is enough to remove most minions that are played on curve while dealing substantial damage to the opponent, which helps soften the enemy hero for other burst damage cards like Pyroblast. Unlike other Secrets that interact with minion plays like Mirror Entity or Potion of Polymorph, its power does not scale with the minion it was activated off of. While it won't be as effective when the opponent plays a big minion, it's harder to check for with small minions especially if conserving Health is a major concern.

One case where Explosive Runes may be problematic is if the opponent plays a Deathrattle minion that they want to kill off, such as Devilsaur Egg.