This article is using {{Card template}}.
See Help:Style guide/Card for how to edit this kind of article.
Edit this article
Exploding Bloatbat
42320 • ICC_021
Regular 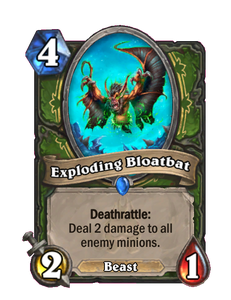 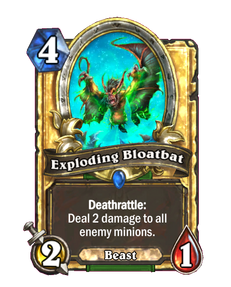 We've all been there after a night of one-too-many funnel cakes. 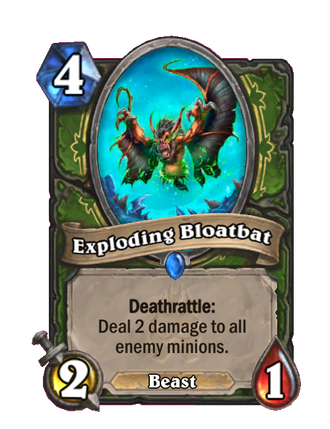 Exploding Bloatbat is a rare hunter minion card, from the Knights of the Frozen Throne set.

Exploding Bloatbat has very low stats for its cost, but has a powerful board clear as its Deathrattle effect. Since it has 1 health, its Deathrattle is easy to trigger, but for more immediate returns, cards like

Play Dead can activate it on the same turn it's played.

Baron Rivendare it can deal 4 damage to all enemy minions, allowing it to be like a

Pompous Thespian tells a fanciful tale about how

Rexxar was transformed into

Bloodreaver Gul'dan, and how he used his new powers to grant immortality and new powers to his fallen animal companions. Suddenly, the thespian is interrupted as the audience begins throwing out suggestions for the kinds of beasts Rexxar created by stitching various animals together, including an exploding bat.