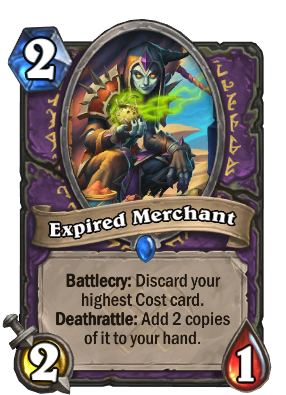 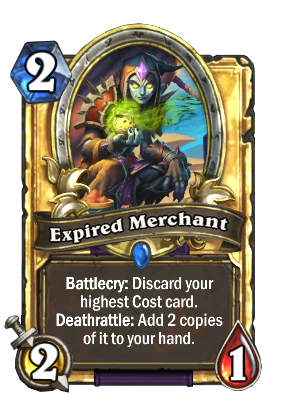 Battlecry: Discard your highest Cost card. Deathrattle: Add 2 copies of it to your hand.
Flavor text

The "best by" date is more like a guideline.

Expired Merchant is a rare warlock minion card, from the Saviors of Uldum set.

Expired Merchant can be obtained through Saviors of Uldum card packs, or through crafting.

Expired Merchant is a delayed value generator, comparable to Loot Hoarder, but creating an extra copy of one of your cards instead of card draw. An extra copy of high-power cards Twisting Nether, Siphon Soul, or Lord Godfrey can prove useful is more suitable for control decks for that reason. Another great cards to discard are cards that trigger their discard effects like Silverware Golem, Fist of Jaraxxus, and Hand of Gul'dan - not only do they proc their effects essentially for free, but you also generate two more copies to discard later.

Expired Merchant does, however, pose a potential risk against opponents with access to silence, transformation, or any sort of effect that removes it from board without destroying it like Sap and Psychic Scream - especially if you discarded your win condition, such as Bloodreaver Gul'dan, for extra value. In this case, it may be better to kill the Expired Merchant quickly with something like Mortal Coil, Plague of Flame, Dark skies, or even Defile to guarantee its deathrattle goes off.

Because the discard effect is targeted, you can use this to discard certain discard synergy cards for your advantage while creating value off of them. For example, you can discard Soulwarden to let it continuously generate itself, High Priestess Jeklik to create four copies of her, or Cruel Dinomancer so that it always resummons itself.