This article is using {{Card template}}.
See Help:Style guide/Card for how to edit this kind of article.
Edit this article
Evolve
38266 • OG_027
Regular 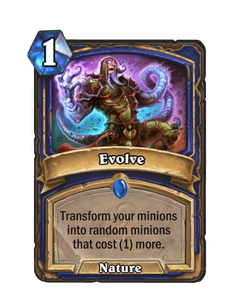 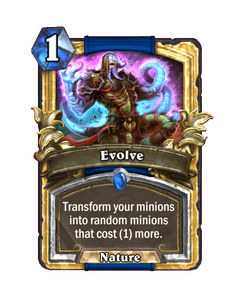 So you say you want an evolution. Well, you know. We all want to change the board. 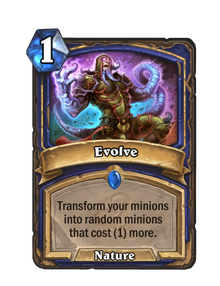 For the event version of this card, see Evolve (Event).

Evolve is a rare shaman spell card, from the Whispers of the Old Gods set.

Evolve suits best in decks focused around Battlecry, as it increases your minions' below average stats while you can still make use of the Battlecries themselves.

Evolve has strong synergy with cards with built-in cost reduction like Thing from Below, Mogu Fleshshaper, Corridor Creeper and Nerubian Prophet, as they can eventually be played for little mana while their high base mana cost makes them Evolve into higher-costing minions. Because Evolve affects all of your minions, it is also suited for decks with a high minion count, specifically minions that summon token minions, like Feral Spirit, Voltaic Burst, Hench-Clan Hag, and Onyxia. Your own totems from your hero power also help. Cards that summon copies of itself like Doppelgangster, Desert Hare, and Saronite Chain Gang work better since the summoned minions share the same base Mana cost as the card.

Obviously, Evolve does not work out well with minions with Overload such as Flamewreathed Faceless and Earth Elemental as those minions are already better than almost all of the minions they can turn into.

Keep in mind that the effects of Evolve are very random. While its impact on your board is positive most of the time, especially if you control many minions, it may also backfire. For example, any 1-cost minions, which includes your Totems, may turn into a Doomsayer which is generally worse for yourself, and minions of nearly any cost have the chance to turn into a minion with an otherwise useful Battlecry but poor stats.

Damage and enchantments are not transferred to the new Evolved minions. One may use Evolve to "heal" and purify their entire board.

This spell depicts an Abusive Sergeant 'evolving' into a tentacled beast of some sort, possibly a faceless one. The victim's former identity can be recognised by its armor and distinctive belt.