This article is using {{Card template}}.
See Help:Style guide/Card for how to edit this kind of article.
Edit this article
Evocation
56389 • BT_006
Regular 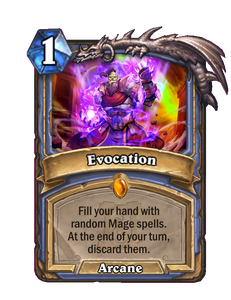 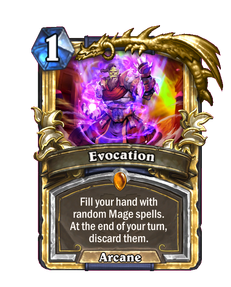 Dimensions: Full • 330 x 410px
Elite
Fill your hand with random Mage spells. At the end of your turn, discard them.
Flavor text

You too could be the winner of the national spelling spree! 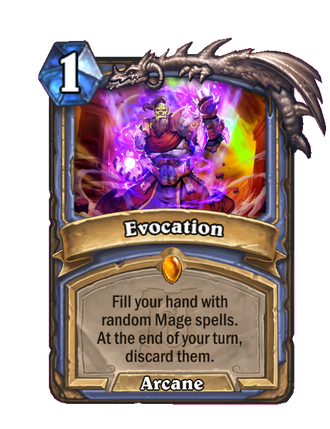 Evocation is a legendary mage spell card, from the Ashes of Outland set.

Evocation is a random but potentially life-saving card. Generally, it's better to play cards with guaranteed results like

Blizzard before trying for Evocation. However, Evocation itself is one of the best cards for finding answers, and should be prioritized over other spell generating effects if you're in a tight spot. It can generate a range of spells, from direct damage to Freeze to minion-creation. It's important to play Evocation early in your turn if you're going to play it, to ensure you have enough time to analyze the best use for all the spells you've been given. If you have spare mana, always remember to cast cards like

Tome of Intellect, so you can "lock-in" those spells permanently and cast them on a later turn.

Evocation is best played with a relatively empty hand in order to maximize both the value and chance to score a potentially game-saving card. Before playing Evocation, it's important to choose whether to spend mana on cards but free more hand space, or take less cards but have more mana to use. Cards that can improve Evocation's results like

This card also synergizes well with

Chenvaala, allowing you to play multiple spells for 5/5s from just one card.

Being an Arcane spell that generates other spells, this can be used quite effectively in a Mage deck running

Sorcerer's Gambit; beware, however, of filling your hand with this effect and milling

Arcanist Dawngrasp, which can be a game-losing play.

Evocation is a channeled Arcane mage ability which allows the mage to rapidly regenerate their mana over 6 seconds.