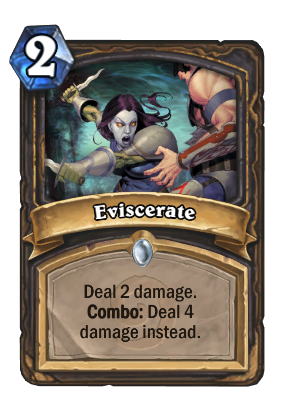 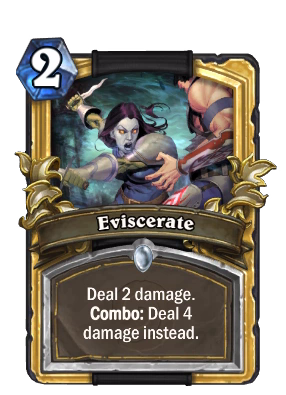 There is a high cost to Eviscerating your opponent. You might tweak your elbow! That really hurts!

Eviscerate is a common rogue spell card, inducted into the Legacy set, formerly from the Classic set.

Eviscerate can be obtained through Classic card packs, or through crafting.

Eviscerate's base effect is subpar for its cost, but as part of a Combo it is one of the most mana-efficient and useful damage spells in the game.

This card can either be used to remove enemy minions or damage your opponent's hero directly. Due to its cheap cost, it can easily be played alongside a Spell Damage minion such as Bloodmage Thalnos or Azure Drake.

Eviscerate is a rogue ability from World of Warcraft that deals direct melee damage. It is the first finishing move learned by rogues, with its damage increased depending on the number of combo points the rogue has.

Previous flavor text: There is a high cost to Eviscerating your opponent: It takes a long time to get blood stains out of leather armor.