This article is using {{Card template}}.
See Help:Style guide/Card for how to edit this kind of article.
Edit this article
Everyfin is Awesome
3007 • LOE_113
Regular 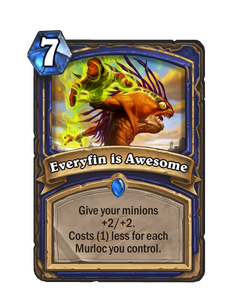 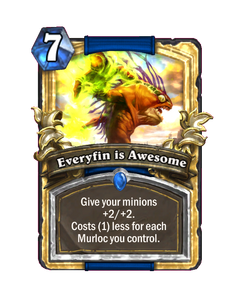 Everyfin is cool when you're part of a murloc team! 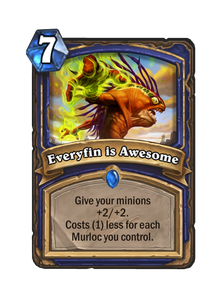 Everyfin is Awesome is a rare shaman spell card, from the League of Explorers set.

This is a Murloc support card that has two uses. Like Bloodlust it provides burst damage which can be used to end the game however unlike that card this Attack boost while weaker is permanent. In addition this card makes your board much harder to remove with the Health increase. Ideally you would play this when you have at least 3 minions on your field in order to get massive value from the card and push your enemy into a bad position.

The output of this spell is of course increased for each friendly Murloc on the board. In combination with the mana reduction this makes the spell exponentially more efficient for each additional Murloc. With a full board of Murlocs this spell will cost 0 mana, and provide +14/+14 in stats.

Both the stat boost and mana efficiency can justify the inclusion of weak, cheap Murlocs in a deck, since this spell will compensate for their weakness, while the larger number of minions will reduce its cost and make it playable earlier in the game. Murloc Tinyfin is an extreme example of the characteristics of this spell. While a very weak option alone, in combination with Everyfin is Awesome the Tinyfin results in a 3/3 for effectively -1 mana.