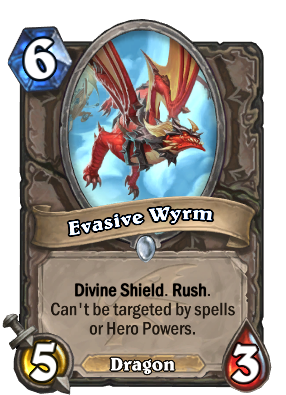 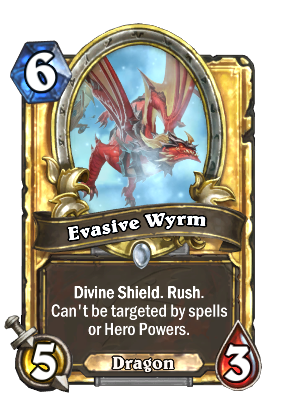 Evasive Wyrm is a common neutral minion card, from the Descent of Dragons set.

Evasive Wyrm can be obtained through Descent of Dragons card packs, or through crafting.

This card is similar to Argent Commander, having 1 more Attack, 1 more health, Evasive, and the Dragon tribe in exchange for having Charge downgraded to Rush. This gives Evasive Wyrm strong tempo and defensive qualities. Evasive saves it from quick removal like Seal Fate or Frostbolt, while Rush and Divine Shield ensures it leaves a decently statted minion on board while removing one. As a downside, not having Charge means it can't be played offensively to deal face damage.

Evasive Wyrm is a decent medium-cost dragon for dragon decks, being useful for minion-to-minion combat against midrange decks. It has good synergy with Embiggen and Strength in Numbers, being able to work around its somewhat expensive cost while still getting its full benefits. It's also a good pick in Arena for its versatility.

The Evasive Wyrm appears to be a Red dragon that is wearing body armor, similar to how the Dragonmaw Clan outfit their dragon mounts.