This article is using {{Card template}}.
See Help:Style guide/Card for how to edit this kind of article.
Edit this article
Ethereal Peddler
39700 • KAR_070
Regular 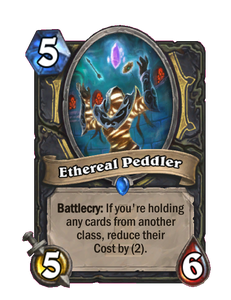 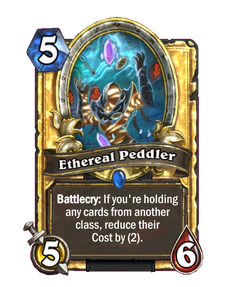 Dimensions: Full • 330 x 410px
Battlecry: If you're holding any cards from another class, reduce their Cost by (2).
Flavor text

Yeah, sure. That Ragnaros "fell off the back of a truck". 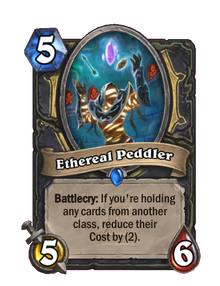 Ethereal Peddler is a rare rogue minion card, from the One Night in Karazhan set.

This card has obvious synergy with cards like Burgle, Swashburglar and Undercity Huckster, as well as Nefarian and Grand Crusader. Given this minion's already reasonable stats for its cost, even one or two reduced cards will make Ethereal Peddler highly cost-efficient.

Prior to Patch 11.0.0.23966, this minion had increased synergy with non-Rogue classes, typically discounting most if not all of the cards in the player's hand.

Ethereals are incorporeal denizens of the Twisting Nether who are driven by a need to collect arcane items and artifacts… at any cost.

Commentary: This was done to make it more clear, especially with upcoming releases.