Difference between revisions of "Ethereal Augmerchant" 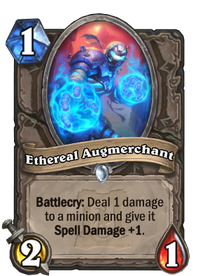 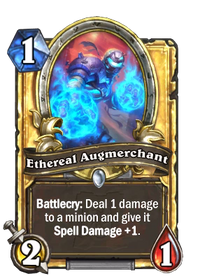 Battlecry: Deal 1 damage to a minion and give it Spell Damage +1.

According to him, undamaged minions just spell problems.

Ethereal Augmerchant is a common neutral minion card, from the Ashes of Outland set.

Ethereal Augmerchant can be obtained through Ashes of Outland card packs, through crafting, or as an Arena reward.

This card can either be played to finish off an enemy minion, or be played on a friendly minion to enhance multiple damaging spells or an Area of effect spell for extra damage. This is notably one of the cheapest sources of Spell Damage in the game alongside Lab Partner, although it does require another minion with more than 1 health to be on your side of the board.

Unlike the similar Guardian Augmerchant, Ethereal Augmerchant can be safely played on an enemy without directly killing it, so long as you finish off the minion before your turn ends, or you are playing against a deck that has a hard time taking advantage of the Spell Damage this minion gives.