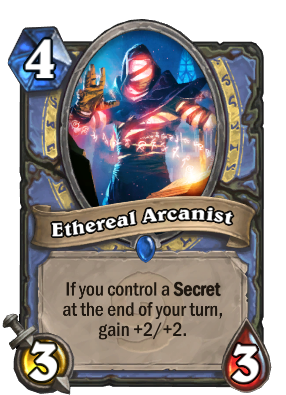 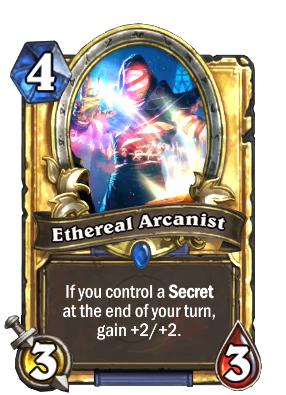 If you control a Secret at the end of your turn, gain +2/+2.
Flavor text

The ethereals are wrapped in cloth to give form to their non-corporeal bodies. Also because it's nice and soft.

Ethereal Arcanist is a rare mage minion card, inducted into the Legacy set, formerly from the Classic set. 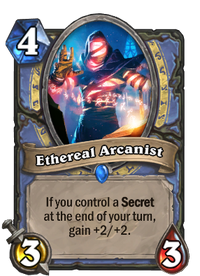 Ethereal Arcanist can be obtained through Classic card packs, or through crafting.

Ethereal Arcanist is best played in combination with Secrets in scenarios where your opponent cannot quickly dispose of him or your Secrets. Try to play multiple Secrets at a time since you can have more than one active Secret up. Depending on the Secrets you have available, try to play the ones that your opponent might not trigger right away. Also try to play a Taunt or maybe some freeze spells in order to protect Ethereal Arcanist long enough to get his effect rolling. A best case scenario is when you have an Ice Block, because it will keep gaining stats until you or it takes fatal damage.

Ethereal Arcanists are encountered in the World of Warcraft expansion The Burning Crusade, hostile mobs found in Terokkar Forest. Ethereals are incorporeal denizens of the Twisting Nether who are driven by a need to collect arcane items and artifacts… at any cost.