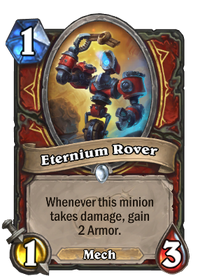 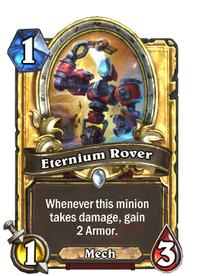 He's all beeps and smiles but you're just a walking pile of armor to him.

Eternium Rover is a common warrior minion card, from The Boomsday Project set.

Eternium Rover can be obtained through The Boomsday Project card packs, or through crafting.

As a 1-mana 1/3, Eternium Rover is already a high-quality 1-drop on its own. On top of that, its card effect will give Warrior a decent amount of armor in the early game. It's also a Mech, which makes it a prime target for Magnetic buffs, giving it more opportunities to gain Armor off of it.

Eternium Rover can be combined with cards like Warpath, Risky Skipper, and Blood Razor to maximize its armor output.

Eternium is an ore that can be found in Outland. It is not found in veins, but rather mined as a byproduct of Adamantite, Fel Iron, Khorium, and Nethercite.