This article is using {{Card template}}.
See Help:Style guide/Card for how to edit this kind of article.
Edit this article
Eternal Servitude
42597 • ICC_213
Regular 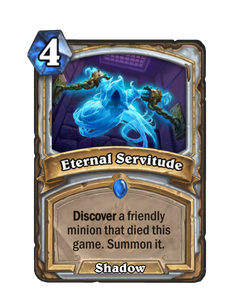 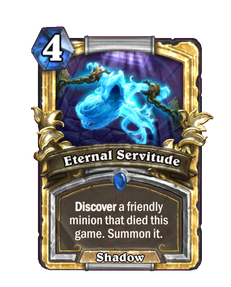 What do you mean I don't get overtime pay for this?! 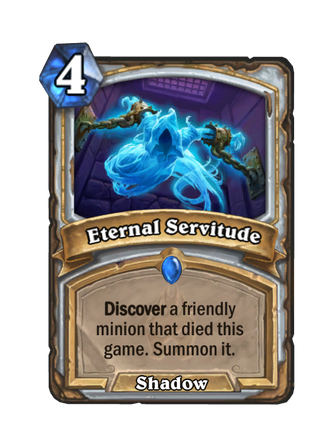 Eternal Servitude is a rare priest spell card, from the Knights of the Frozen Throne set.

Eternal Servitude can offer massive value under the right conditions. Its Discover effect removes much of the randomness that plagued previous

Resurrect cards, allowing for far more flexibility and reliability when playing it. It should be a solid choice for Control Priest decks that play a lot of high value minions, as well as N'Zoth Priest, as Deathrattle cards have natural synergy with Resurrect effects.

In Arena, Eternal Servitude could be potentially useful for a lot of the same reasons as in Constructed, although it should be noted that the quality of minions is generally lower in an Arena draft, and that this card will likely become flooded with low value minions from the early game, giving you a low chance of reviving a more worthwhile minion.