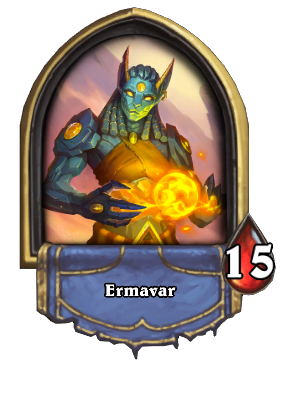 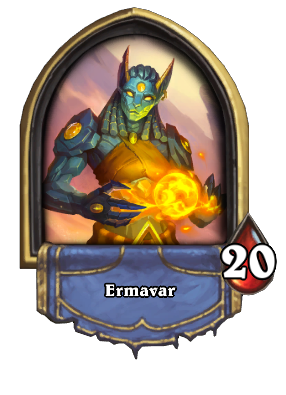 The first of her name, Ermavar is revered as the waker of flame.

Ermavar is a boss that can be encountered in Chapter 1 of Tombs of Terror. After completing Chapter 1, this boss encounter will be available in any completed chapter.

This hero can pose a minor threat to those unprepared. For Normal, the lack of early spells can let you use powerful minions to quickly take control. If playing Reno, using Stolen Titan Secrets here and playing a spell deck can prove powerful. The Hero Power is Flamewaker's ability. The easiest way to beat her on Heroic is to spam at the start, easily winning if Ermavar does not have Cinderstorm or Flame Ward. If she plays a Secret, it can only be Flame Ward. Afterwards, try using powerful minions to shut down the game. The main threat here would be Fireball.

Reno Jackson
A fire mage, eh? Well maybe I could... show you some moves.

Ermavar
Soon, you will be nothing but ash.

Ermavar
Burnnnn.
Feel the heat.
The flames like you.
To ashes.

Ermavar
All will be consumed in the dark pharaoh's flame.
Fireshaping is far better than ice sculpting.
Flesh burns, but stone only warms in the fire.

Shaping this little one...

I'll burn you all.

Ermavar
Did you really think you could interfere without getting burned?

Ermavar is original to Hearthstone.