Hearthstone Wiki
Register
Don't have an account?
Sign In
Advertisement
in: All cards, Wild format cards, Pages with no result queries, Draenei art

This article is using {{Card template}}.
See Help:Style guide/Card for how to edit this kind of article.
Edit this article
Equality
756 • EX1_619
Regular 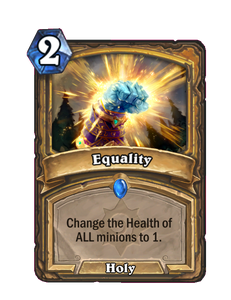 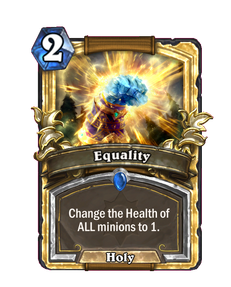 We are all special unique snowflakes... with 1 Health. 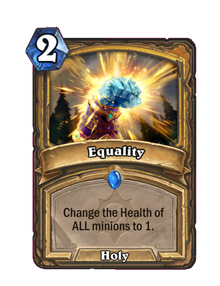 Equality is a rare paladin spell card, inducted into the Legacy set, formerly from the Classic set. 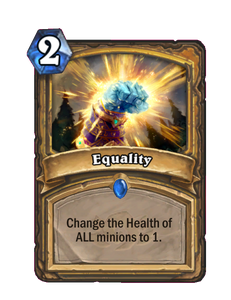 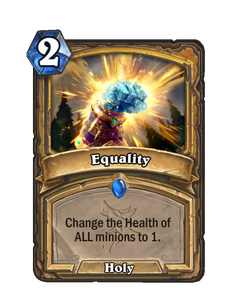 Two copies of regular Equality are obtained for raising paladin to level 5.

Two copies of golden Equality (Core) are obtained for winning 100 games as paladin.

Equality (Core) is uncraftable and cannot be crafted or disenchanted.

Playing Wild Pyromancer and Equality will not clear the board when the health of minions are being persistently buffed by cards such as Stormwind Champion or Southsea Captain.[1] After Equality is activated, persistent aura updates occur first before other minion effects are activated.

Equality should be saved for when the drawback of having the health of all your minions set to 1 is outweighed by the benefit of doing the same to your opponent. It is often used as a combo with Consecration, which will wipe out all of the opponent's minions aside from those protected by Divine Shields. Equality also works well with Avenging Wrath and Sword of Justice, where a single point of damage is all that is needed. Playing the neutral Wild Pyromancer and following it with Equality will effectively clear the field of all minions without Divine Shield, friend or foe.

Be careful when playing Equality against other classes with cheap board clearing spells, as using Equality puts your creatures at risk. Spells like Swipe, Fan of Knives and Whirlwind are excellent tools for this.

Equality works well with Murloc decks, as most Murlocs only have 1 Health to begin with, allowing it to be used with little penalty to your own minions.

Equality is useful in countering minions with Enrage, as the 1 Health will be their maximum, cancelling the Enrage effect and making it impossible to trigger it again without Health buffs.

Note that silencing a minion affected by Equality will return its current Health to its original maximum value, even if the minion was previously damaged below this number. This allows Equality to be used in combination with Silences like Wailing Soul to restore the paladin's minions to full Health.