This article is using {{Card template}}.
See Help:Style guide/Card for how to edit this kind of article.
Edit this article
Entomb
3015 • LOE_104
Regular 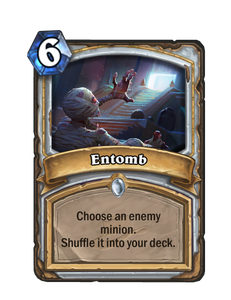 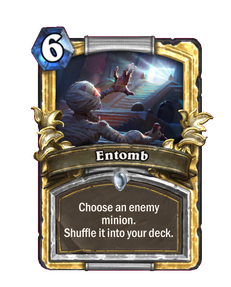 It's perfectly safe as long as you remember to put in air holes. 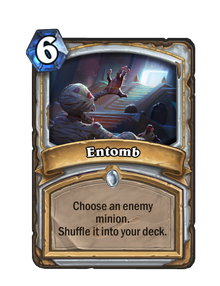 Entomb is a common priest spell card, from the League of Explorers set.

This card essentially has two effects: it removes the minion from your opponent's board, without triggering any Deathrattles; and it shuffles the card into your own deck.

The stage of the game in which it is used significantly determines the likelihood of gaining the benefit of this card's secondary outcome, as does the expected duration of the match, determined partly by the player's deck type. During the first part of the game, the likelihood of drawing the Entombed minion yourself next turn is very low, while in the late game, it is much higher. Using this spell with an empty deck guarantees you will draw that minion next turn, and will also save you an instance of fatigue damage.

The longer the game goes on, the greater the likelihood you will draw the minion. Control decks therefore have a greater chance of enjoying this second effect, and may benefit from it more, especially if the intention is to go to fatigue. The opposing deck is also important, since fast-moving decks may finish the game regardless of your own intentions.

Of course, in some cases you won't want to draw the Entombed minion. Minions which don't fit well in your deck may end up clogging up your hand and wasting card draw, or even providing unwanted on-draw effects like that of Sea Reaver.

This card is probably best saved for minions that are either especially threatening or especially desirable, probably in that order. In the late game the latter goal becomes more likely to be achieved.

The fact that this spell removes the opponent's minion from the board and adds it to your own deck makes it notably better than the druid card Recycle.