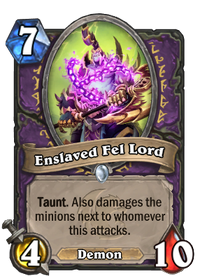 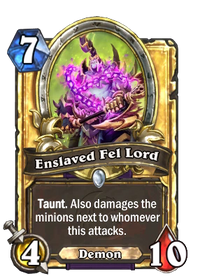 Taunt. Also damages the minions next to whomever this attacks.
Flavor text

He's not really chained up. He just wears that to scare the imps when they get too unruly.

Enslaved Fel Lord is a common warlock minion card, from the Core set.

Enslaved Fel Lord is uncraftable and cannot be crafted or disenchanted.

With its taunt, high health and effect suitable for dealing with wide boards, Enslaved Fel Lord is primarily an anti-aggro card, although one has to survive until turn 7 in order to play it and stabilize. Against control, having no immediate effect and no deathrattle, it will most likely get removed easily. In Wild, this may not be too big of a tempo loss if it is summoned by, for example, Voidcaller, but Enslaved Fel Lord has to compete for a slot in the deck with Voidlord and Enhanced Dreadlord.

Fel lords are a type of large and powerful mo'arg demons in service of the Burning Legion. Towering over their lesser minions, they often wield massive, yet slow weapons. Speculatedby some scholars of the Legion to be an evolved version of the common felguard, fel lords serve as enforcers in the direct service of Archimonde. Their cruelty is matched only by their brute force.