This article is using {{Card template}}.
See Help:Style guide/Card for how to edit this kind of article.
Edit this article
Enhanced Dreadlord
56516 • BT_304
Regular 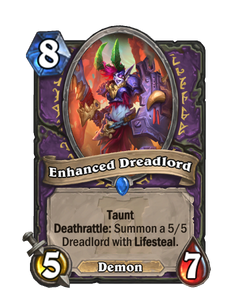 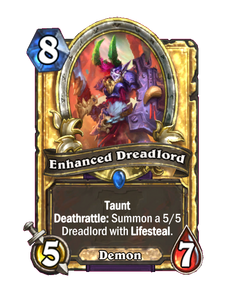 Photo actually taken across the street in the reflection of a doorknob. 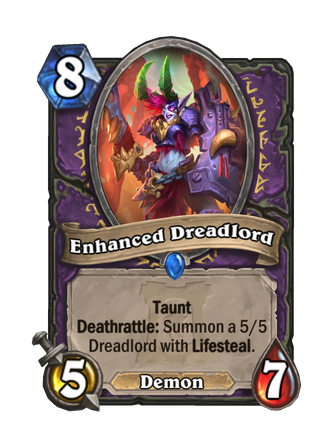 Enhanced Dreadlord is a rare warlock minion card, from the Ashes of Outland set. 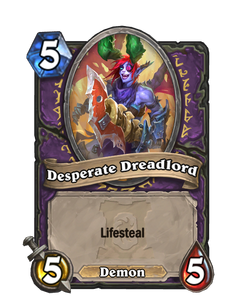 Enhanced Dreadlord is a solid anti-aggro card. The base body is a decently large Taunt minion, although an expensive one. It trades 1/1 in stats for a potent Deathrattle. The

Desperate Dreadlord left behind can also help contest the board and recover some lost health, although the lack of Taunt makes it less important for your opponent to kill.

Enhanced Dreadlord is an obvious fit with

The Dark Portal, which is a solid card in the handlock archetype. The idea behind The Dark Portal is essentially paying four mana the turn before to gain the lost tempo in a big swing turn the next turn.

An example of this tempo gain would be as follows: If you play the dark portal on turn four and somehow have eight cards in hand, which is feasible for handlock, and you draw a minion with a large mana cost such as Enhanced Dreadlord, you now have gained a tremendous amount of tempo and in most cases can play another card such as

Nether Breath alongside with the minion you just drew.

Queen of Pain, this minion is a female Nathrezim. This particular one has been given mechanical enhancements by the Rusted Legion.