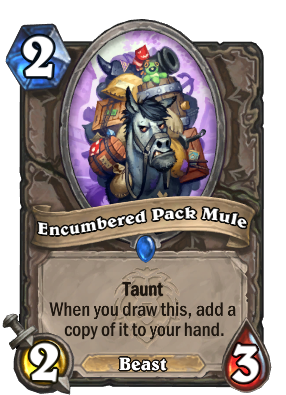 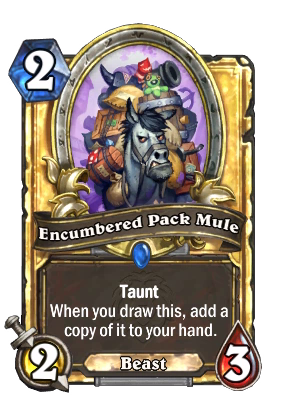 Taunt
When you draw this, add a  copy of it to your hand.
Flavor text

"Now I can pick up EVERY knick-knack."

Encumbered Pack Mule is a rare neutral minion card, from the United in Stormwind set.

Encumbered Pack Mule provides two copies in a price of one when drawn from the deck. It should be note that if left in Mulligan Hand, it's effect won't work so it should always be not kept in the starting hand.

It has plenty of synergies since Encumbered Pack Mule provides 2 cards into your hand instead of the usual 1 allowing to get better result with hand-based effects such as Mountain Giant, Abyssal Summoner, Goldshire Knoll, Package Runner, Anetheron, Entitled Customer.

Encumbered Pack Mule benefits from double the value from Hand Buff effects from Smuggler's Run, Alliance Bannerman, or Grimstreet Outfitter. Because it is also a Beast, it can be benefitted by Don't feed the Animals and gaining charge from Tundra Rhino

There are 3 achievements related to Encumbered Pack Mule.