Encounter at the Crossroads 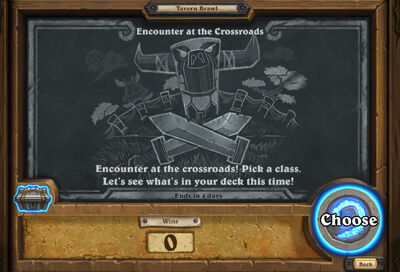 "Encounter at the crossroads! Pick a class. Let's see what's in your deck this time!"

Encounter at the Crossroads is a Tavern Brawl. It debuted on July 15, 2015. For exact times, see the schedule.

This Brawl seems to have inspired the later Cart Crash at the Crossroads, featuring a similar design but with the addition of a second class.

This Brawl took part in a three-part series of special Tavern Brawls which celebrated the start of the Year of the Mammoth.

This Brawl sees players competing with almost entirely randomised pre-made decks. Players can choose any class, and will then receive a deck randomly composed of neutral and class-specific cards. Decks are composed of 30 cards (15 random class cards and 15 random neutral cards), but may break the usual limitation of 2-per-deck (1-per-deck for legendaries), allowing any number of copies within a deck.

On March 15th 2017, a special change was added to this Tavern Brawl. From the third turn onwards, at the beginning of the second player's third turn, a 4 mana 3/5 Party Crasher appears at the start of each player's turn, but only if the player has no Party Crasher on their side.[1]

This minion has Taunt but cannot be controlled by the player. Also, this minion will deal damage equal to its attack to the opponent at the end of each controlling player's turn (this is similar to the ability of Auto-Attack used in the Chess Tavern Brawl or the Chess boss encounter in the adventure One Night in Karazhan).

A random assortment of cards makes it harder to play classes that are combo-heavy such as Shaman or Rogue.

Likewise, without access to your deck, you can't plan for an aggro or control strategy. This may make Warrior difficult, as most of their viable decks are control decks.

In general, you want to play a tempo style. It may be possible to play aggro with Hunter, Rogue or Warlock.

The main strategy is to try and constantly reduce the number of Party Crashers that the opponent has, while maintaining your own Party Crashers and staying ahead in health for your hero.

Hunter has some good direct damage and removal to control number of spawning party crashers. 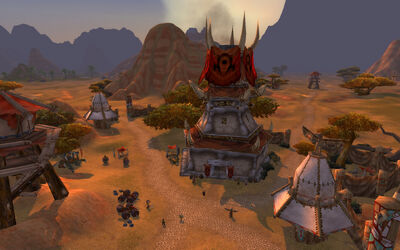 The Crossroads in World of Warcraft.

The Crossroads is the largest Horde town in the Northern Barrens, aptly named for the crossing of the main north-south road (from the Gold Road) and the road from Ratchet in the east all the way to the Stonetalon Mountains in the west. Combined with its central location and the wyvern flight routes, the Crossroads offers access to nearly all Horde outposts in Kalimdor.

In addition to the numerous Horde players that gather there, Crossroads attracts its fair share of Alliance players as well. Within striking distance of Ashenvale to the north, and the port of Ratchet to the east, it is not uncommon to find an all out war happening outside one of the entrances of Crossroads on a daily basis. Larger scale Alliance assaults tend to occur during peak server population periods.