This article is using {{Card template}}.
See Help:Style guide/Card for how to edit this kind of article.
Edit this article
Enchanted Raven
39350 • KAR_300
Regular 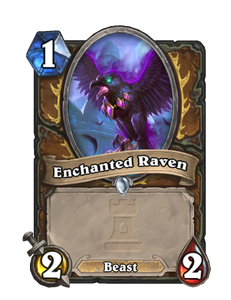 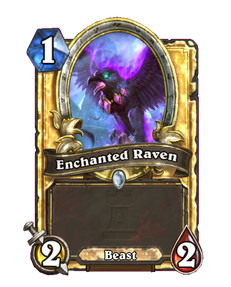 Once upon a midnight restive, Medivh pondered, feeling festive! 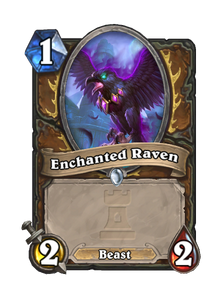 Enchanted Raven is a common druid minion card, from the One Night in Karazhan set. 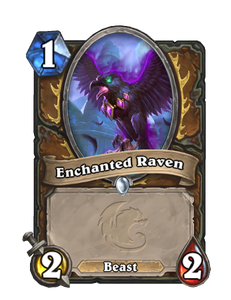 Enchanted Raven is a solid minion to play on turn 1. Having no special abilities, it compensates by having strong raw stats for only 1 mana, capable of killing or at least trading evenly with most 1-drops and 2-drops. Being a Beast, it also benefits from Druid cards that have Beast synergy. If played on turn one, Mark of Y'Shaarj is a perfect follow-up on turn two.

This apparently magical raven may be intended to represent Medivh in raven form, especially given their matching jewellery (see image below).

Enchanted Raven was originally designed to be a "Plaguebat" and be featured in the Curse of Naxxramas adventure as the Hunter class reward. [1]